Rainbows and Clouds with Jessica Frost-Ballas 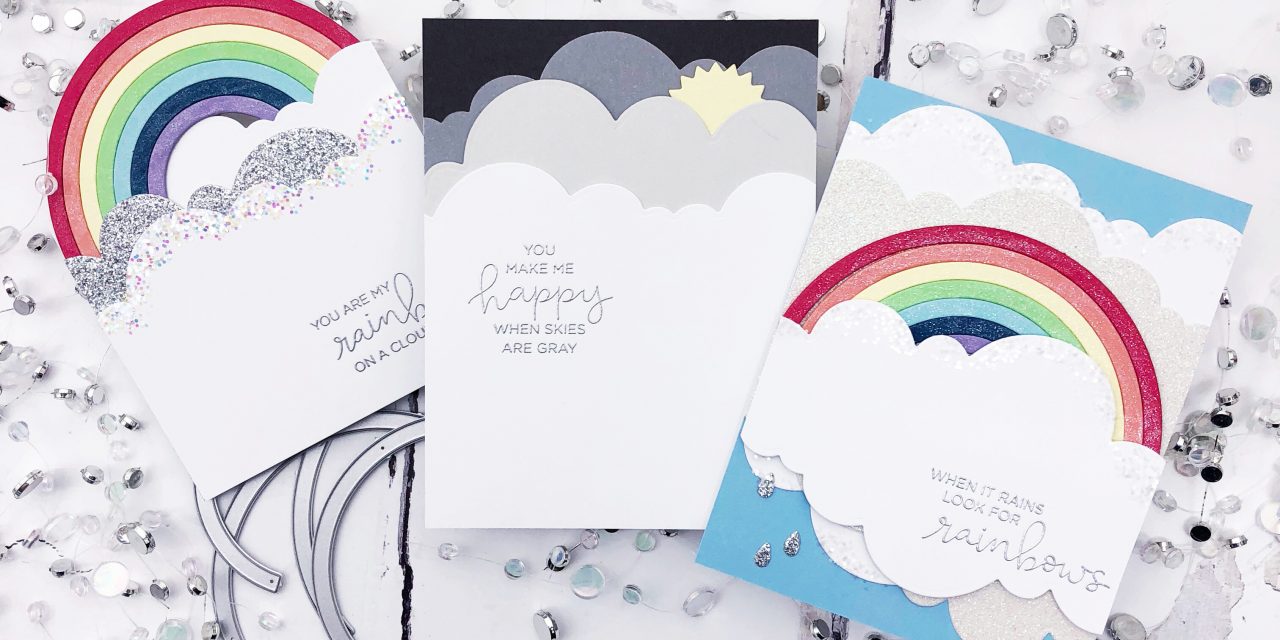 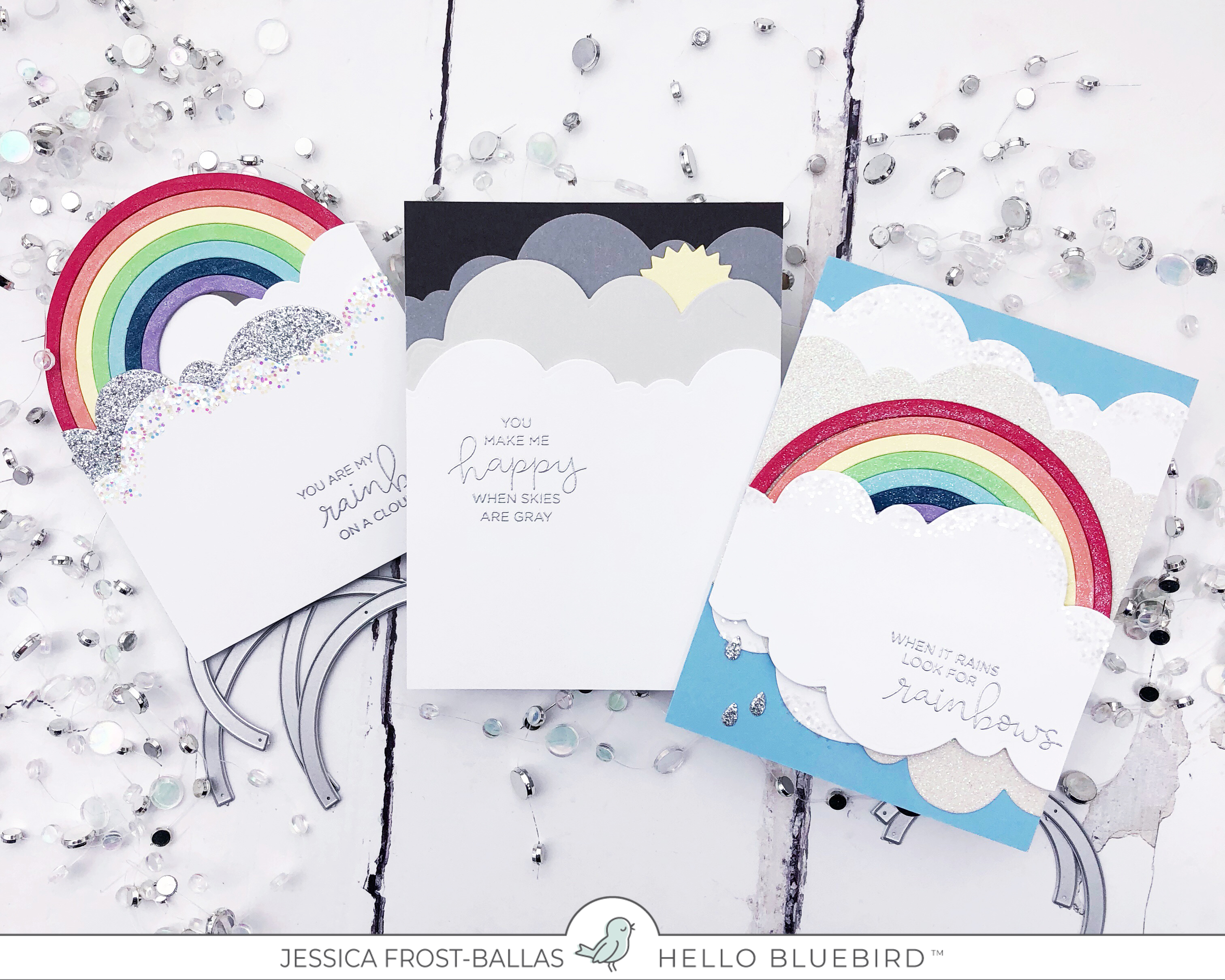 Good morning!  Jess here with my first post for the Hello Bluebird design team!  I created a trio of cards using the pretty stand-alone dies from this release: Rainbow Sky and Grassy Knoll with the beautiful Rainbow Script stamp set! 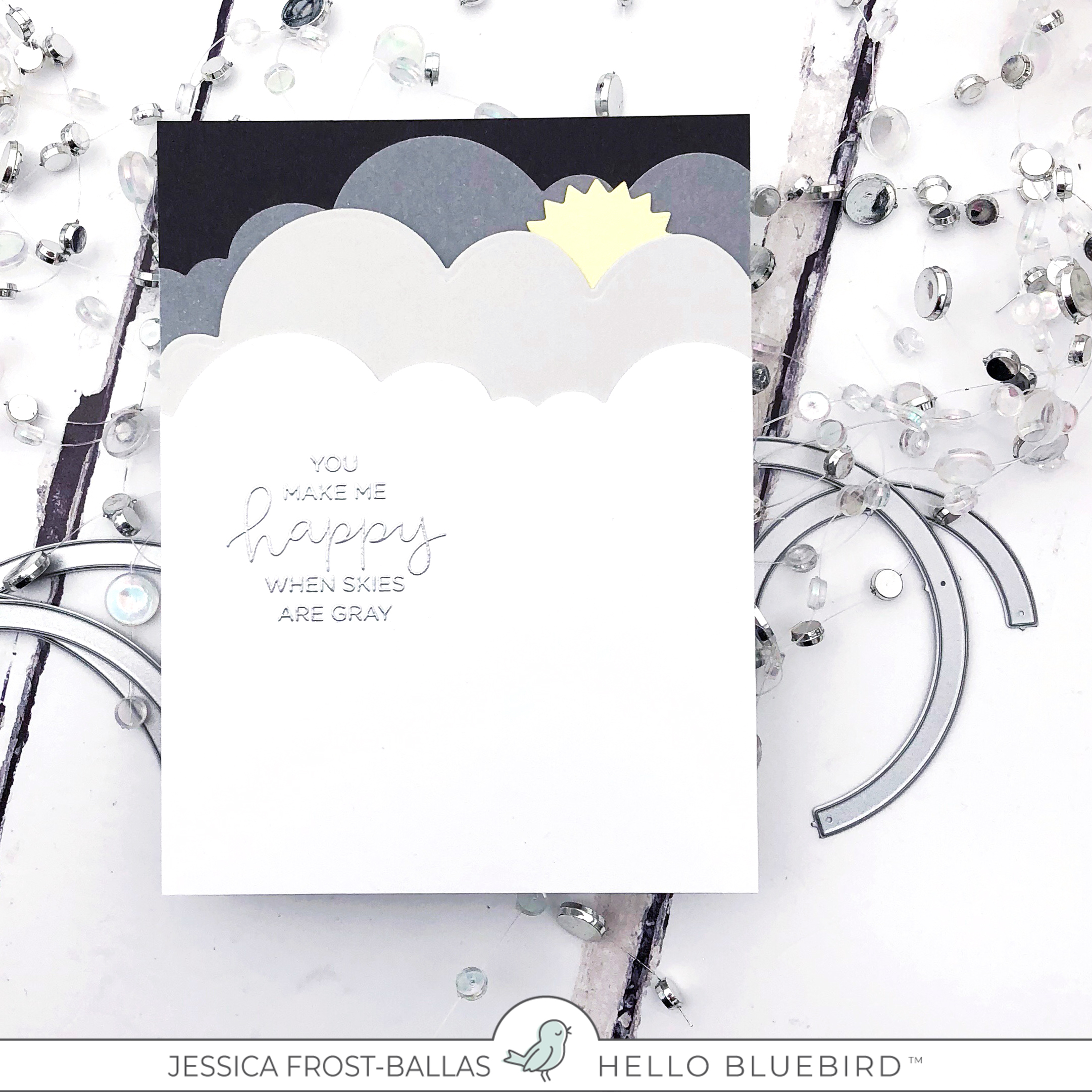 My next two cards step things up a notch but still rely mainly on die-cutting various cardstocks! 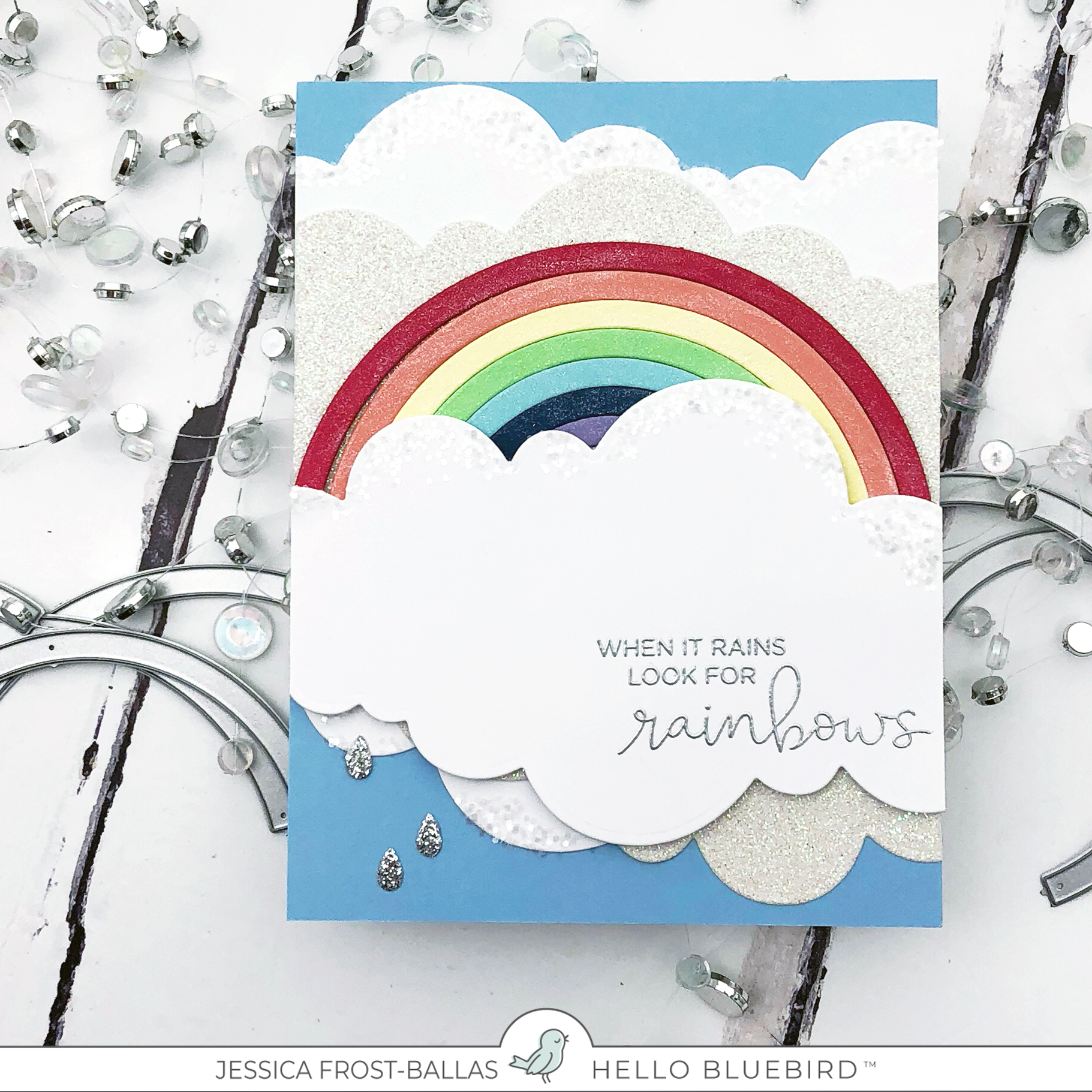 To start I die-cut both ends of two pieces of white cardstock and a piece of white glitter paper with the cloud dies from Grassy Knoll.  I varied where I placed the dies to get the different cloud edges just from two die shapes!  Then I applied liquid adhesive to the curved edges of the largest white cloud die with a dauber and sprinkled it with chunky glitter.  I did the same to the top of the other white cardstock cloud.  Once the glue was totally dry I stamped my sentiment from Rainbow Script onto the smaller white cloud and heat-embossed it with silver embossing powder.  Next I die-cut my rainbow from Rainbow Sky with a variety of rainbow-colored cardstocks and applied a thin layer of spectrum noir clear sparkle to each rainbow color.  I also die-cut the raindrops from silver glitter paper.  To assemble my card I simply adhered the clouds and rainbow to a sky blue panel with regular ATG adhesive.  My top white cardstock layer is adhered with foam mounting tape and the raindrops are adhered with liquid adhesive! 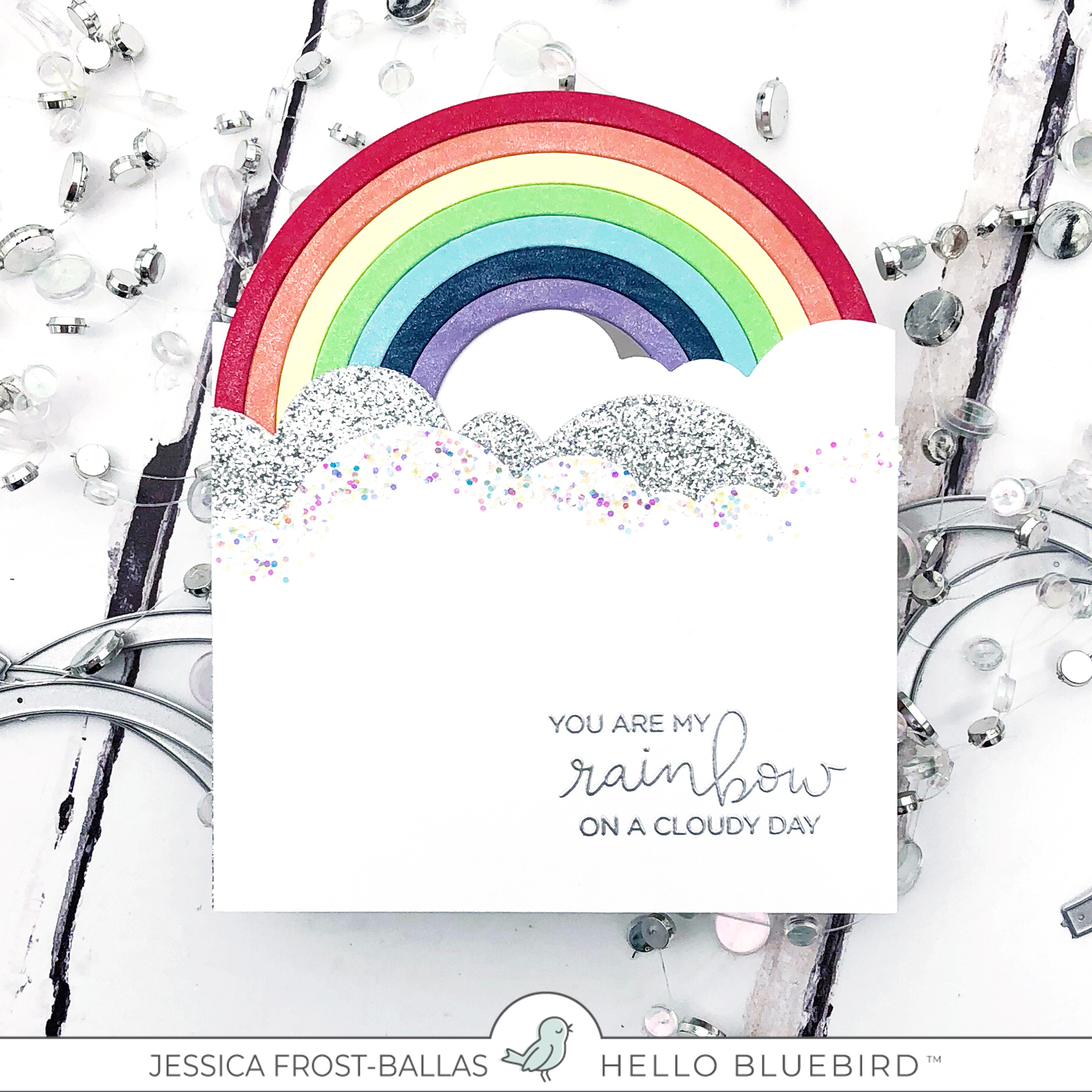 My final card looks tricky but really isn’t!  I started by die-cutting my rainbow from Rainbow Sky with a variety of colored cardstocks and applied a thin layer of spectrum noir clear sparkle to each rainbow color.  Then I placed the largest and smallest arches onto a piece of white cardstock and die-cut them together to create a rainbow-shaped guide.  I added adhesive to the guide and paper-pieced my rainbow on top.  This gave me a nice solid rainbow embellishment for the top of my shaped card.  Next I die-cut more clouds from Grassy Knoll using two piece of white cardstock and silver glitter paper.  To the shortest white cardstock I dabbed on liquid adhesive and sprinkled it with iridescent chunky glitter (different from my previous card).  Once it was totally dry I stamped the sentiment from Rainbow Script and heat-embossed it with silver embossing powder.  Next I trimmed a regular A2 card base down to a 3″ base.  Then I simply adhered and layered the clouds and rainbow on top of it.  The tallest cloud hides the top of the card base creating the look of a shaped card.  But the total height of the card is still less than 5.5″ so it fits nicely in a regular envelope!

I hope this gives you some ideas on how to use our stand-alone dies as focal points of cards!  Thanks so much for visiting today and have a wonderful day! 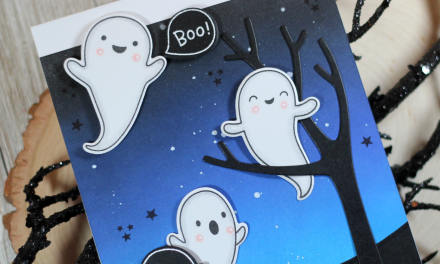 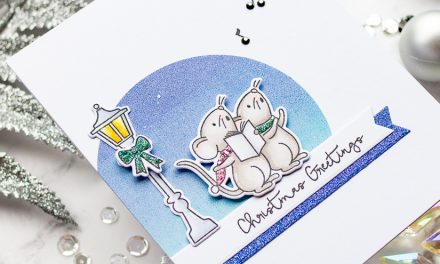 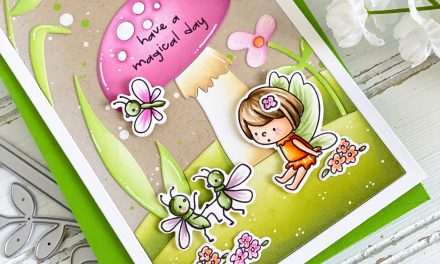 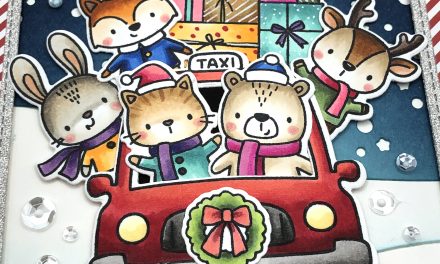